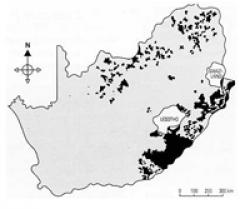 President Ramaphosa has said that the government will likely proceed with amending the Constitution to allow for expropriation of land without compensation to accelerate land redistribution in South Africa, in light of the widespread support that appears to have emerged for such a move in the public consultations of this proposal.

We agree that the redistribution of resources within South Africa is of dire urgency. We remain concerned however that the proposed constitutional amendment will leave us in the lurch. In order to understand better what is at stake, we want to analyse what is in Section 25 of the Constitution from our perspective.

This section is part of the Constitution that comes under the Bill of Rights that identifies how we as citizens may demand the government treat us. Section 25 rules that no one may be arbitrarily deprived of their land. The government may only expropriate, or confiscate land from a private owner, if it is in the public interest which Section 25 does state includes addressing racial redress and equitable access to natural resources.

The key element of current debate in South Africa is that the Constitution specifies that this expropriation can only happen under compensation that is either agreed to by the parties, or determined by a court. This requirement, many argue now, has meant that land redistribution in post-apartheid South Africa has been too slow.

Section 25 also says that the amount of the compensation involved needs to be determined by taking into account the history of the acquisition of the land. Critically for our people, the Constitution sets the date of racialised deprivation of land as 19th June 1913. Although the passage of the Native Land Act was a seminal moment of South Africa’s history, we find this date to be an arbitrary measure of the country’s trajectory of dispossession and disenfranchisement. The Free State for instance had forbidden Black ownership of land from 1876, and the Cape where the vast majority of our people lived, did not use the mechanism of the Native Land Act to dispossess people of their land, and has had a much longer history of pushing KhoiSan people away from the traditional territories through encroachment of settlers.

If section 25 is indeed to be reopened, we demand that its amendments also take into account the racialised dispossession of land that has taken place for all peoples in this country whose histories have been riddled by long centuries of violence, not only within the last 100 years.

Furthermore, we need to think about equitable access to land that occurs at not just a national level, but regional level. While access to land for people of KhoiSan ancestry may be adequate in parts of the Northern and Western Cape, those of us in the Eastern Cape still do not have adequate access to our traditional lands, which may be erased in analysing statistics at a purely national level. Tribal leadership that demands that land be redistributed to them first does not serve our needs.

We continue to believe that the issue of compensation is a gimmick raised by the government to distract the population; it has long had the means to enact adequate resource redistribution in South Africa, but has simply chosen not to in order to appease its own friends. Let’s bear in mind that it is not only history that does not serve the KhoiSan well, but also contemporary practices of the government that allow for the accumulation of wealth into the hands of the few, which excludes the vast majority of us. Nonetheless, we will continue to advocate for our rights in all the political opportunities that emerge, and we believe an amendment to Section 25 to the Constitution cannot occur without acknowledging our loss and offering redress to our dignity.

Welcome to our blog!

The South African government is planning to pass the Traditional and Khoi-San Leadership bill this coming year. This law will change how democracy is experienced by many South Africans, yet the vast majority of the population remain ignorant to its repercussions. In particular, many South Africans are unaware of who the Khoi-San are, what their history has been, and what struggles in contemporary South Africa they face. In partnership with the Cobuqua people – a Khoi-San nation in what is now known as the Eastern Cape – this blog will attempt to explain this history, and to highlight the challenges which many Khoi-San people confront today, including how the bill has an impact on them.
%d bloggers like this:
%d bloggers like this: